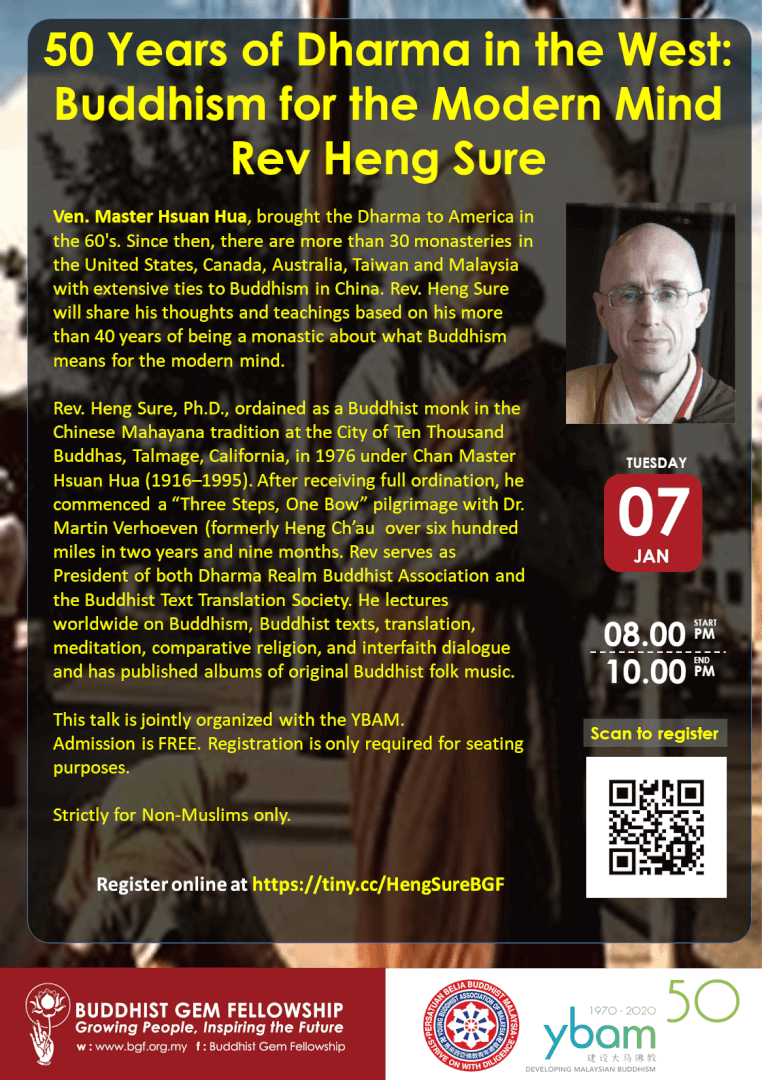 50 Years of Dharma in the West: Buddhism for the Modern Mind with Reverend Heng Sure

Our teacher, Ven. Master Hsuan Hua, brought the Dharma to America in the 60’s. Since then, there are more than 30 monasteries in the United States, Canada, Australia, Taiwan, and Malaysia with extensive ties to Buddhism in China. Rev. Heng Sure will share his thoughts and teachings based on his more than 40 years of being a monastic about what Buddhism means for the modern mind.

Rev. Heng Sure, Ph.D., is ordained as a Buddhist monk in the Chinese Mahayana tradition at the City of Ten Thousand Buddhas, Talmage, California, in 1976. Born in Toledo, Ohio, he was finishing his M.A. in Oriental Languages at the University of California, Berkeley when he met his teacher, the late Chan Master Hsuan Hua (1916–1995). After receiving full ordination, he commenced a “Three Steps, One Bow” pilgrimage dedicating his efforts to World Peace with Dr. Martin Verhoeven (formerly Heng Ch’au). Traveling up the California coast highway from South Pasadena to Ukiah, a distance of over six hundred miles in two years and nine months. During this time, he maintained a vow of silence which he extended after the pilgrimage for a total of 6 years.

Fluent in Mandarin Chinese, French, and Japanese, Rev. Sure regularly leads lectures, seminars, and retreats in a variety of venues on at least three continents a year. He holds a Ph.D. from the Graduate Theological Union at Berkeley and serves as President of both Dharma Realm Buddhist Association and the Buddhist Text Translation Society. He is also the Managing Director of Berkeley Buddhist Monastery, Professor of DRBU and a guest lecturer at Bond University, Australia. He lectures worldwide on Buddhism, Buddhist texts, translation, meditation, comparative religion, and interfaith dialogue and has published albums of original Buddhist folk music.

Tags: Dharma in the West