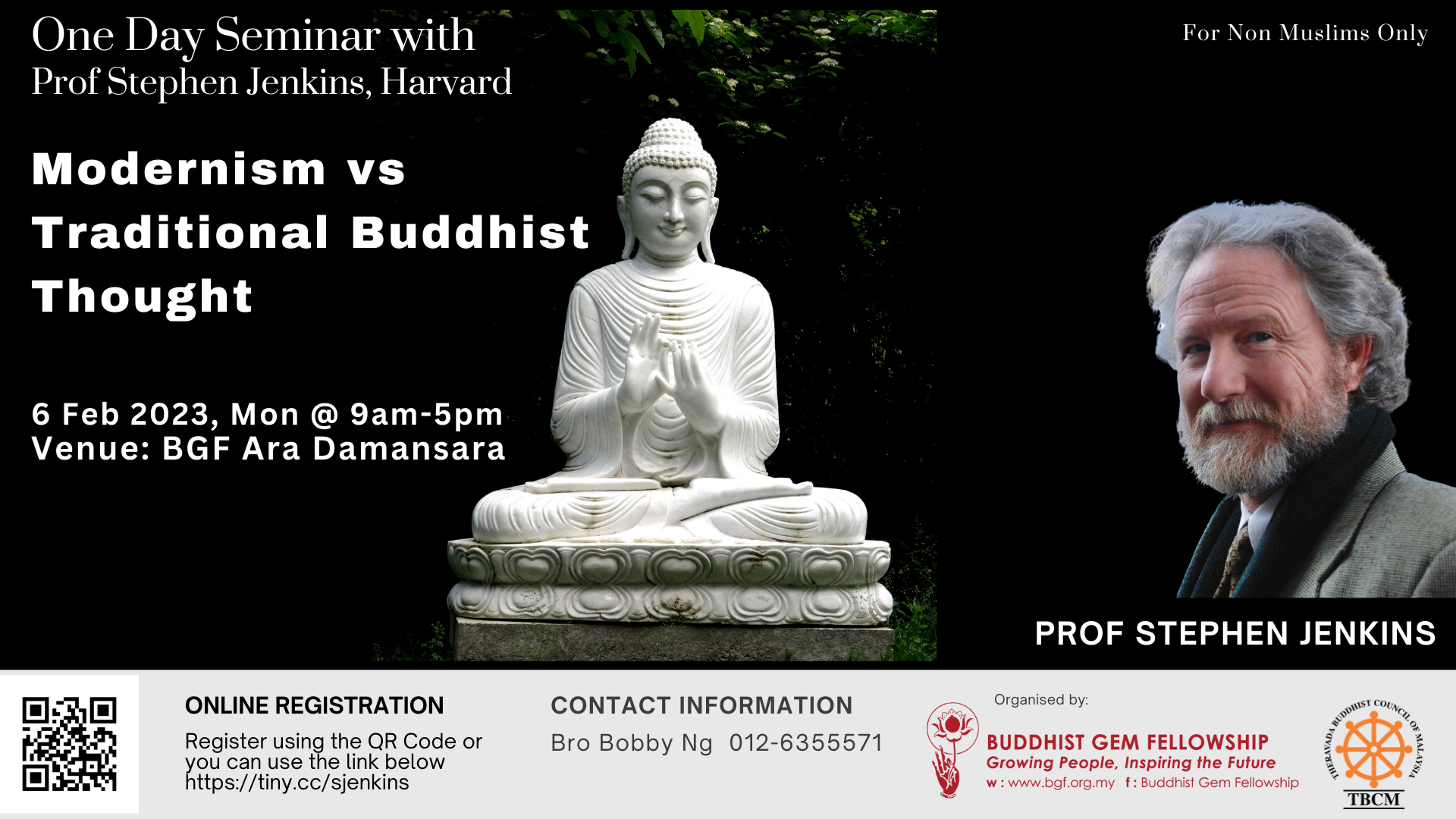 Join us in a one day seminar with Professor Stephen Jenkins about Modernism vs Traditional Buddhist Thought on 6th February 2023, which is a Thaipuasam replacement holiday.

Prof Steve will cover the so called “pizza effect”; in which intercultural feedback loops generate shared distortions, the modernist rejection of karmic rebirth, the idea that engaged Buddhism is a modern novelty rather than an ancient ideal, the idea that compassion is a matter of self-sacrifice rather than the key to human flourishing, the projection of Gandhi’s nonviolence [which actually comes from Tolstoy and Thoreau] on Buddhism which obscures a much more subtle and nuanced Buddhist ethic, possibly the misinterpretation of no-self and emptiness.

Stephen Jenkins is Professor Emeritus of Religious Studies at Humboldt State University. He received his doctorate from Harvard. His research is primarily focused on Indian Buddhist concepts of compassion, their philosophical grounding, and their ethical implications. He has previously offered talks at Kyoto, Harvard, Berkeley, Mahidol and Oxford universities and at Tibetan, Thai and Chinese monastic institutions.

His understanding of Buddhism is informed by years serving study abroad programs in India, Tibet, Nepal, Sri Lanka, Thailand, and Japan. Recent publications include: “Compassion and Human Flourishing”; in Buddhist Visions of the Good Life for All, Ed. Sallie King, 2021; “Heavenly Rebirth and Buddhist Soteriology” in The Oxford Handbook of Buddhist Practice, Ed. Paula Arai, 2021; “Confronting the Harmful with Compassion,” in Nonviolence in World Religions, Ed. Mark Juergensmeyer, 2021; “Buddhist Foundations”; in Cambridge Companion to Religion and War, Ed. Margo Kitts, forthcoming; “Once the Buddha Was a Warrior,” in The Nature of Peace and the Morality of Armed Conflict, Ed. Florian Demont-Biaggi, 2017; and “Waking into Compassion: The Three Ālambana of Karuṇā,” in Moonpaths, Jenkins et al., 2015.